Friendly giants made of Styropor®

What happens when an artist has a penchant for robots and the reuse of discarded materials? Oversized "Styrobots" are created from used Styropor® packaging.

American artist Michael Salter creates fascinating statues out of the packaging material and has meanwhile established collaborations with entire cities to get his material. "I love the idea that an everyday product can be looked at in a completely new way by making small changes," says the 54-year-old artist. His path into the world of liberal arts was not predetermined from the start. Salter originally studied marketing and fine arts. After a few years working as a graphic designer, he no longer wanted to be part of the "capitalist system", as he says. Instead, he began to comment on the visual culture around him with his art. "I look at things we buy and throw away every day and try to put them in a completely new context," Salter describes his work.

This is exactly what inspired him to create his "Styrobots". As a big fan of Star Wars films and fascinated by the world of science fiction, Salter developed a great love for robots early on. "I guess I always liked the idea of robots that could be friendly or even caring, as opposed to militant or aggressive. I wanted my own giant friendly robot, and that was my first motivation," he says. For the oversized sculptures, he needs a correspondingly large amount of packaging material. When Salter started looking into Styropor® as a material, he found that it was not only abundant among people, but also available for free. Apart from its availability, he appreciates the material's physical properties. "It is strong, light, easy to cut and glue. This makes it quick and easy to work with once I find the right adhesives and fitting designs," the artist explains. Once he has gathered enough material, there are many details to consider before and during the construction of his artworks. "If the robots are taller than three metres, they need an internal armature made of wood to prevent them from tipping over," he explains. For the particularly large Styrobots, Salter builds the sculptures directly on site in the exhibition space. Otherwise they wouldn't fit in the lifts and through the doors of the museums.

In his early days, he still went looking for Styropor® in rubbish containers and asked the public for donations. In the meantime, his fame has enabled him to enter into cooperative agreements with the respective exhibiting city. For example, for an exhibition in Texas, the city of Houston put out a call on the radio, internet and TV for residents to bring in their used Styropor® packaging. It turned out, given enough time, most people had something to contribute. "So much material came together that I was able to build the biggest robot. People are willing to put in a little effort to see the whole artwork at the end," Salter reports. Following his exhibitions, the robots have to be taken apart and the individual parts made of Styropor® are recycled again by the city. "It breaks my heart every time my elaborate robots are dismantled. My art is just meant for the moment and that kind of preciousness is what I love about it", he says. Turning used material into something completely new is Salter's own way of thinking about recycling, "It's not just about reusing the material, the artwork should end up going beyond what the material was originally intended for. In a world that is running out of resources, it makes sense to me to use the things we already have."

"It breaks my heart every time my elaborate robots are dismantled..."

"The lightness of Styropor® is again a great advantage here,"

The woman behind the curtain

Karoline Hinz has been working for theatre, music and film productions for many years. However, the artist is not in the limelight on stage, but behind the production scenes. She creates impressive stage sets out of Styropor® that bring theatre performances and film sets to life.

"The process of creating a stage set from Styropor® can be compared to a pixelated image that slowly becomes sharper," is how Karoline Hinz describes her work on art made of expandable polystyrene (EPS). The 33 year-old freelancer completed a classical training as a stage designer at the Berlin Opera. After graduating, she immediately set up her own business and has since worked on a wide variety of projects. By learning various sculpting and painting techniques and with her knowledge of different materials (such as Styropor®, silicone and plaster), she is able to bring even the most absurd ideas to life.

Styropor® is particularly suitable for her work: "For many years, the material has established itself as a material for entertaining, oversized installations and stage sets because it is comparatively cheap, easy to work with and extremely light. This also makes it much easier to assemble and dismantle," the artist explains. She has been using the white classic for about 15 years, also because it can be worked without much effort. "Even large objects can be lifted without any problem, and the surface is very easy to sand," she continues. 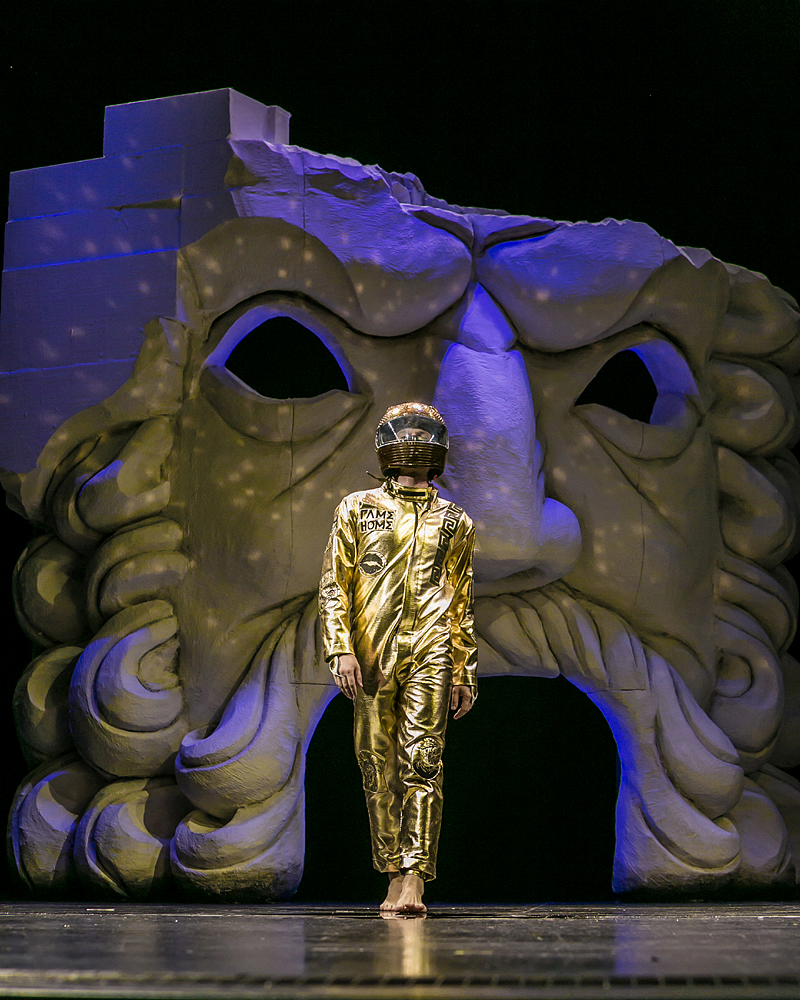 For example, Hinz was commissioned by the Erlangen Theatre to create an oversized Styropor® sculpture for the play "Odysee - Eine Heimsuchung". The artist worked on the four-metre-high stage design for about four weeks. "The duration always depends on the complexity of a sculpture, whether a steel construction has to be built in, for example, and ultimately also the colour design," she explains. In her line of work, there is usually not much time to complete the scenery, as a fixed date is set for the production or performance. She usually gets the Styropor® material, depending on the size of the project, in the form of sheets from the hardware store. For larger volumes, the exact measurement and thickness can be supplied directly.

If space permits, the stage sets are stored in the theatres after performances. Especially in opera, plays are often performed again after a few years. The exceptionally large works of art, like the statue of the Odyssey, have to be able to be disassembled. "In this case, the statue can be disassembled into three parts," Hinz explains. This is not only important in order to fit through the doors of the theatre houses, but also makes it easier to transport the works from her studio in Berlin to the playhouse. "The lightness of Styropor® is again a great advantage here," says the artist.

It is not only theatre houses that are interested in her work, Hinz also receives unusual customer enquiries from time to time: she has already made a Medusa sculpture over 3m high out of Styropor® for a fitness studio. Before she starts working on the material, she designs a clay model to estimate the volumes. When it comes to working the Styropor® blocks, the choice of tools runs from rough to fine. "I usually start with an electric saw. For fine work I then switch to knives and wire brushes," Hinz explains. Finally, the sculptures are hand-painted.

The Medusa made of still unpainted Styropor®.

The start of the paint application.

The Medusa in its finished state.

How marble is "transformed" into Styropor®

The Piedmontese sculptor Fabio Viale has developed a technique that gives his sculptures a special Styropor® texture. With this optical illusion, he captivates the viewer.

"The World of Marble" - Interview with Fabio Viale (© Deutsche Welle, with kind permission of DW) 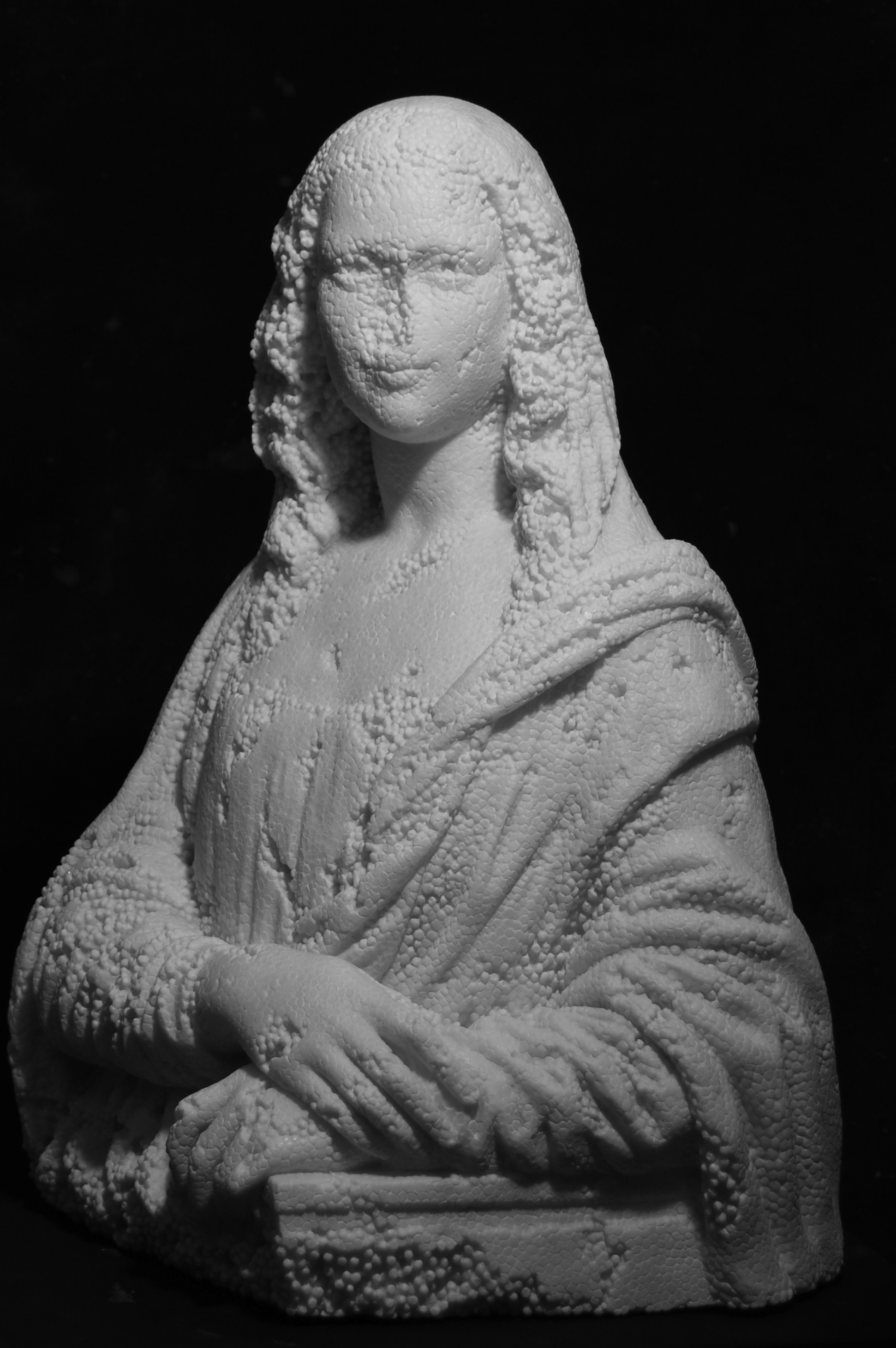 The great Renaissance artist Michelangelo believed that a work of art already "lives" in a block of marble. So to reveal the sculpture, all one had to do was remove the excess. While still in art school, Piedmontese sculptor Fabio Viale embraced this vision. "I realised that, unlike my classmates, I had a special gift.  I could see how the form emerges from the block of marble, and that's something you can't learn," the artist says.

This gift was the driving force that led him to refine his sculptural technique at the Academy of Fine Arts and then in Carrara, the "home" of the precious stone. During his training, he experimented with different shapes, volumes and images. This process eventually led him to explore the very essence of this art, as one of his most famous and symbolic works "Souvenir Gioconda" (or "Mona Lisa Souvenir") clearly demonstrates. "I wanted to turn this famous painting by Leonardo da Vinci into a sculpture," explains Viale, "so I started working on a 3D model. Despite my best efforts to make it as realistic as possible, there was always something missing. I couldn't create the slightly blurred effect of the Mona Lisa's facial contour. When I finished the marble work, I decided to hit her on the nose with a hammer because I just couldn't stand the sight of it any more. Paradoxically, this proved to be a liberating action. Without her nose, the Mona Lisa looked more realistic."

But that wasn't all: beyond this instinctive, cathartic act, Viale had to find a texture that would make the work "gritty" and thus create the blurred look. "I found the solution in a Styropor® effect, which was a real metamorphosis," he explains. "This technique blurred the object and transformed it into something else, something unique that was also incredibly alluring." The effect thus became a kind of lure, a deception that the artist used to captivate the viewer. The well-intentioned deception behind it is an extraordinary work. To create a 10-centimetre sculpture with this technique requires about an hour of intensive, precise work. The final effect is so realistic, Viale explains, "when you tell people that the sculpture is actually not made of Styropor® but of marble, they instinctively touch it to see if it's true. It's overwhelming because all the other senses say it's impossible." 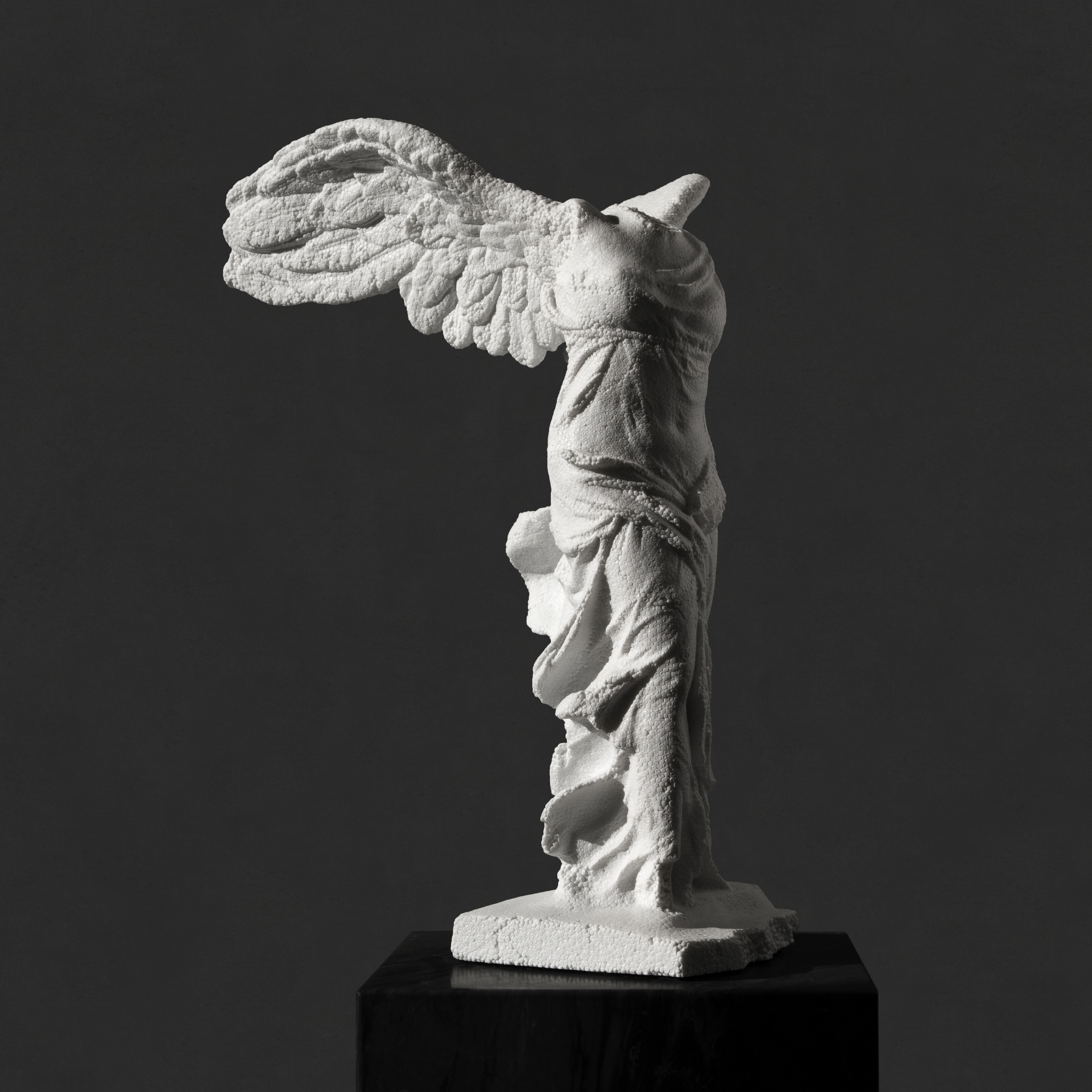 But what message is the artist trying to convey with this and all the other techniques he has used throughout his career - such as "tattooing" copies of classical statues? "In truth, I don't create sculptures to send messages," Viale answers. "My works have their own autonomy and I am more interested in what happens while I create them. I only have to have partial control over the work, because part of the sculpture has to develop on its own. I am interested in creating two opposing worlds that interact and release energy. In my work I am looking for such a tension."

This tension is crucial for Viale to create iconic, highly evocative sculptures. Does he ever get stuck on one of his works? "No, not at all! Because if I got attached to one work and kept it for myself, I wouldn't be able to create any more. So when I see them leave my studio, I'm always happy and think to myself that my next sculpture will be even better."

"I found the solution in a Styropor® effect, which was a real metamorphosis",...